The safety and operation requirements of airport power centrals require adapting safety protocols and having redundancies to ensure constant operation, which foresee possible responses to possible failures with active protocols and status and incident signals. Moreover, current regulations regarding spillage controls, whose consequences not only cause extra expenses and inconveniences, but can also involve waste processing companies that could be able to stop the installation for the duration of cleaning tasks, as well as legal consequences that could lead to administrative and economic fines.
Given the electrical power needs of power stations, they have multiple emergency generators, some of them redundant, which condition the design of operation and safety protocols. Control and distribution of fuel in the entire system has always been planned taking into account the required redundancy in airport power stations.
In this case, the installation had six power generator units coupled as primary and redundant, controlled by three touch screen panel automatons and with Mod-bus communication among them as well as communication to central control. Daily service tanks are filled with ATAM – GET pump systems, one for each operation line.

The criterion of standard DIN 4755 was applied when selecting the pipes. Gas oil pumping speed in propulsion pipes, between 1 and 1.5 m/s and suction speed between 0.2 and 0.5m/s.

To detect leaks in the double skin of the main tank, we chose a DDP-25 vacuum system with regenerative pump and fluid separation valve. This significantly decreases the possibility of false alarms, which occur more often with other detection methods. That detection system complies with standard EN 13160-1, Class 1.

There are two main tanks for supply, controlled by panel automatons at the front of the control panels. They monitor measuring and control the unloading process of the tanker with an overfill alarm; they also have two motor pumps in case pumping between them is required. EDM-40 continuous level reading analog probes for the control of those tanks.

To pump from the main tank to the daily service tank corresponding to each power generator unit, an ATAM – GET pumping system with two alternating motor pumps is installed. Specifically, we selected ATAM 1500 GET with a flow of 1500 L/h. Each pump is capable of producing the total flow required for pumping to two fully loaded generators, as well as recovering the maximum level at the same time. Pumping systems have a collector tray with infrared spillage detection that would send a signal to central control in case of a spill.

he daily service tanks will be filled via the status signal from the level control probes in the daily service tanks. The control and safety system consists of: Filter, N.C. (normally closed) solenoid valve for filling control, N.O. (normally open) solenoid valve for maximum level safety and a flow limiter that controls the proportional flow filling for each tank and blocks the line if it receives an overfilling signal.
The solenoid valves are managed with the control panel consisting of a full color touch screen automaton at the front of the operation panel and provided with the analog and digital signals required in each case for the control and status of the tanks, as well as the 110% safety control via the flow switch in the vents and the other spill-protection systems, for both the return pumps and the pumping stop protocols.
Operation is conducted via a level differential in the daily service tank. When the level drops down to 70%, the level switch issues an order to open the N.C. solenoid valve and start the ATAM pumping system, performing pumping operations until reaching 90% when an order to stop the pumping system and close the N.C. valve is issued.
If due to a failure of the N.C. valve or the pressure unit operation the level exceeds 90%, there is a high level safety milestone at 95% that launches the return pump with a flow higher than the filling flow to the main tank, until reaching 75%.
Total block of a pumping system, certain spill protocols or interruption of the main generators for reasons directly linked to its proper operation activate the start-up of the entire redundant system, thus ensuring constant power generation.
All operation and safety protocols are managed by the automaton, as well as communication with the airport central control with Mod-bus. 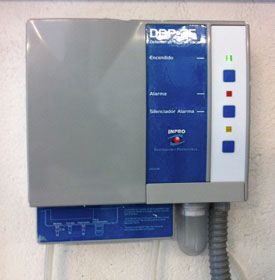 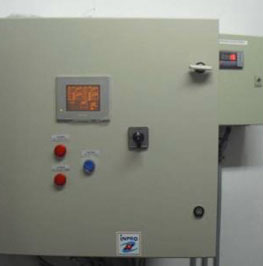 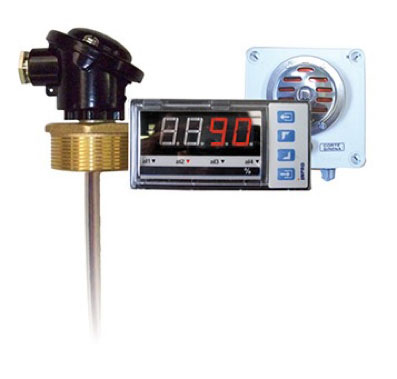 Elements of the installation supplied by INPRO

Continuous level display and control unit completely adapted to the needs of the installation. Displays the level at all times, expressed as a percentage. All required operations can be done via the relay module and the analog communication output. Customized manufacture makes this unit perfect for all kinds of tanks and a wide array of fluids.
•    Standard operating temperature: 40ºC that can be adapted to reach up to 125ºC.
•    Control unit in standardized module (DIN 43700) 96 x 43 x 100, can be mounted with panels.
•    Flexible probe with sealed head, can be fastened with 2’’, 11/2’’ or 1’’ nuts. Mounted with aluminum or standardized flange.
•    Overfilling warning alarm triggering with 95 dB acoustic signal, automatic shut-off and reset push button with IP-55 protection. It complies with the requirements of the standard MI-IP03 on “Oil Installations for own consumption”.

Vacuum leak detector for interstitial chamber in double-skinned tanks according to EN 13160-1, Class 1.
•    Has a regenerative pump controlled with an adjustable vacustat. Thus keeping a -400 mBar pressure between the inner and outer skins of the double-skinned tank. When dropping below 380 mBar, the pump regenerates the vacuum; if there are any holes, the negative pressure does not regenerate; the alarm triggers upon reaching 340 mBar.
•    These units are perfect for tanks of up to 3 m of diameter.

Oil pump systems ATAM-GET are synonyms for adaptation. They are designed to fulfill pumping and redundancy needs and to comply with the safety protocols of installations controlled by centralized control panels, with touch screen automatons and Mod-bus communication. A perfect combo for every installation. Control panels for filling motor pumps, overflow, solenoid valves, alarms, etc., as well as possible operating management inputs.
•    Compact units with all the elements required for gas oil pumping, joined in an aluminum collector on a furnace-painted plate bench.
•    Flows of up to 70 Liters/hour, with the possibility of on-demand pumping via speed variation.
•    With a flow meter to instantly check the operating conditions.

Placing collector trays under certain elements of the installation is recommended. Particularly, equipment that could leak due to its characteristics or during maintenance tasks. Placing a spillage detector for the tray gives the possibility of creating protocols.
•    Furnace-painted plate tray with the appropriate size for each circumstance.
•    Spillage detector in the control panel and detection probe. Infrared optical sensor for oil and water, conductivity sensor for water or both, mounted on the same probe.
•    Standard 1.5 m probe.
•    The control unit of the detector is mounted in a box with impact-resistant plastic cover. The control unit contains two voltage free relays, one for commuting and the other one usually open.

SMMR level switches perform the operations required for the filling process and the tank overfilling alarms and protocols. Custom manufacture based on actual needs.
•    Probes manufactured from different materials to work with fluids such as gas oil, oil, water, milk, etc.
•    Probe with sealed head, can be fastened with 2’’, 11/2’’ or 1’’ nuts, mounted with aluminum or standardized flange.
•    For controlling pumps, solenoid valves, alarms, etc…
•    Control box with relays and power supply.

Pump with self-adjusting blades, with positive movement and constant flow. Silent, robust and high-performance. Particularly recommended for transfer of all kinds of liquid -as long as they are not abrasive nor contain suspended solid particles.
•    Blade adjustment is due to three variables. Centrifugal force, fluid pressure and push rods, so losses and turbulence are greatly decreased.
•    Adjustable safety valve included in pump body.
•    Pump body in cast or stainless steel, based on needs.
•    Bench from gray cast iron.
•    Three-phase engine with Atex certificate.
•    Possibility of 2 rotation directions by placing an inverter.
•    The power of the associated motor prevents possible problems at launch with low temperature fuel.

Supply of power generators in the Torre Espacio Skyscraper 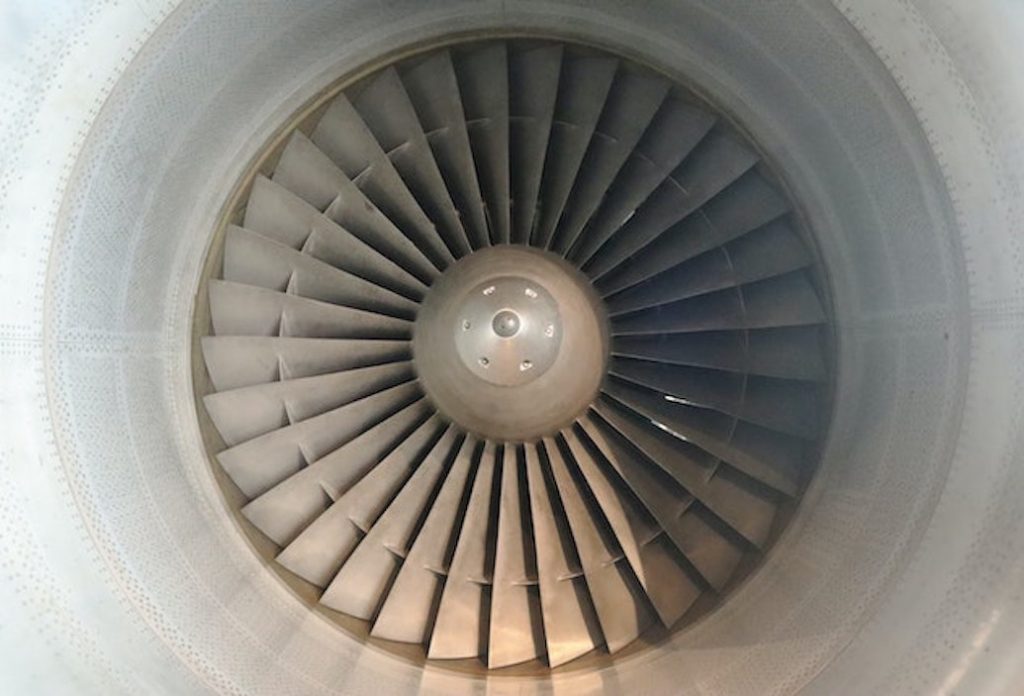 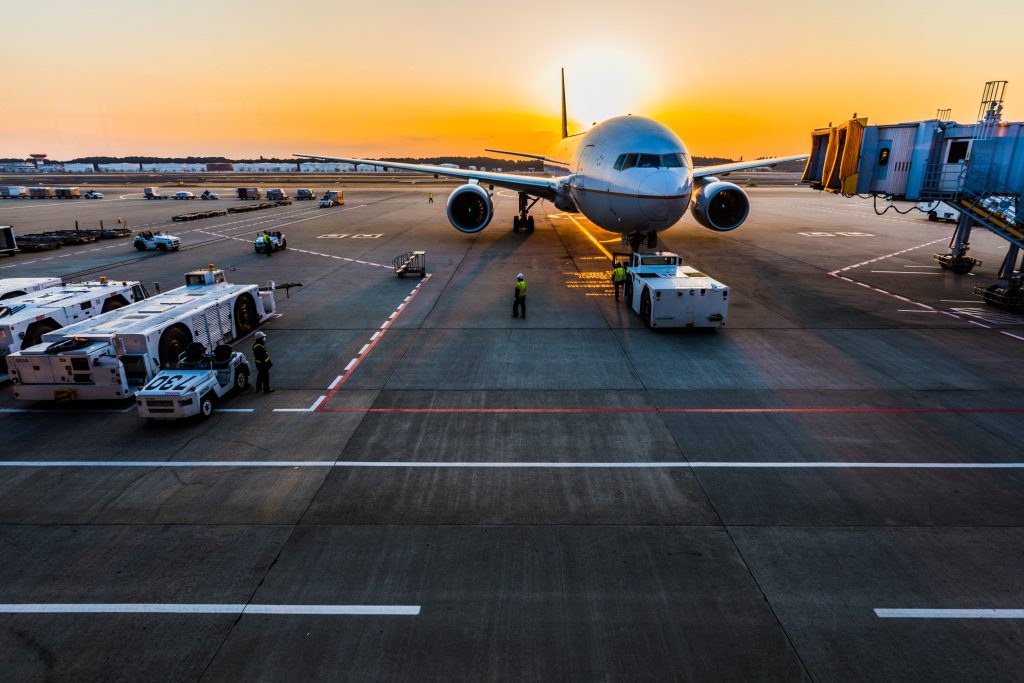 Defrosting and frost protection for aircraft in runway headings 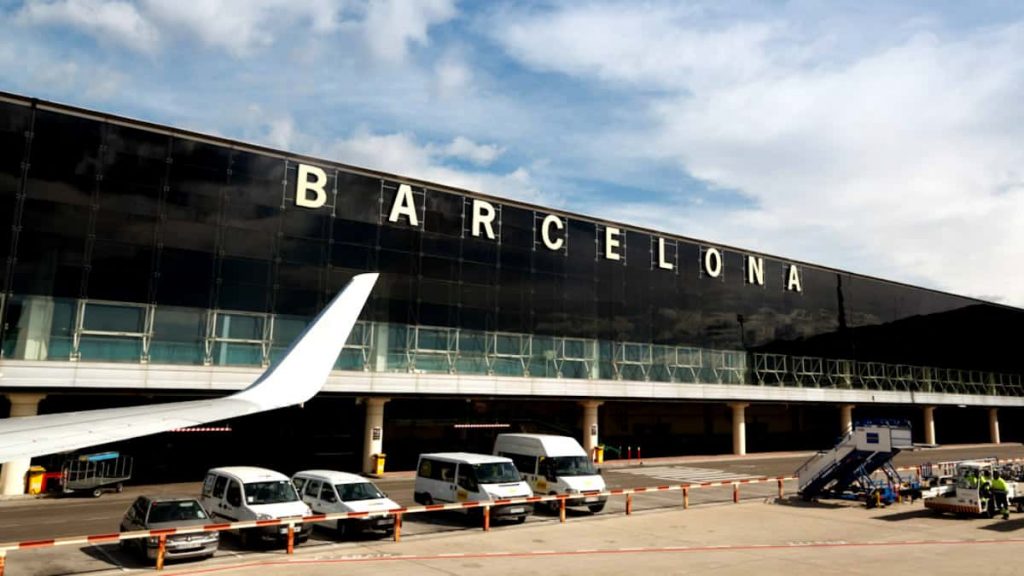